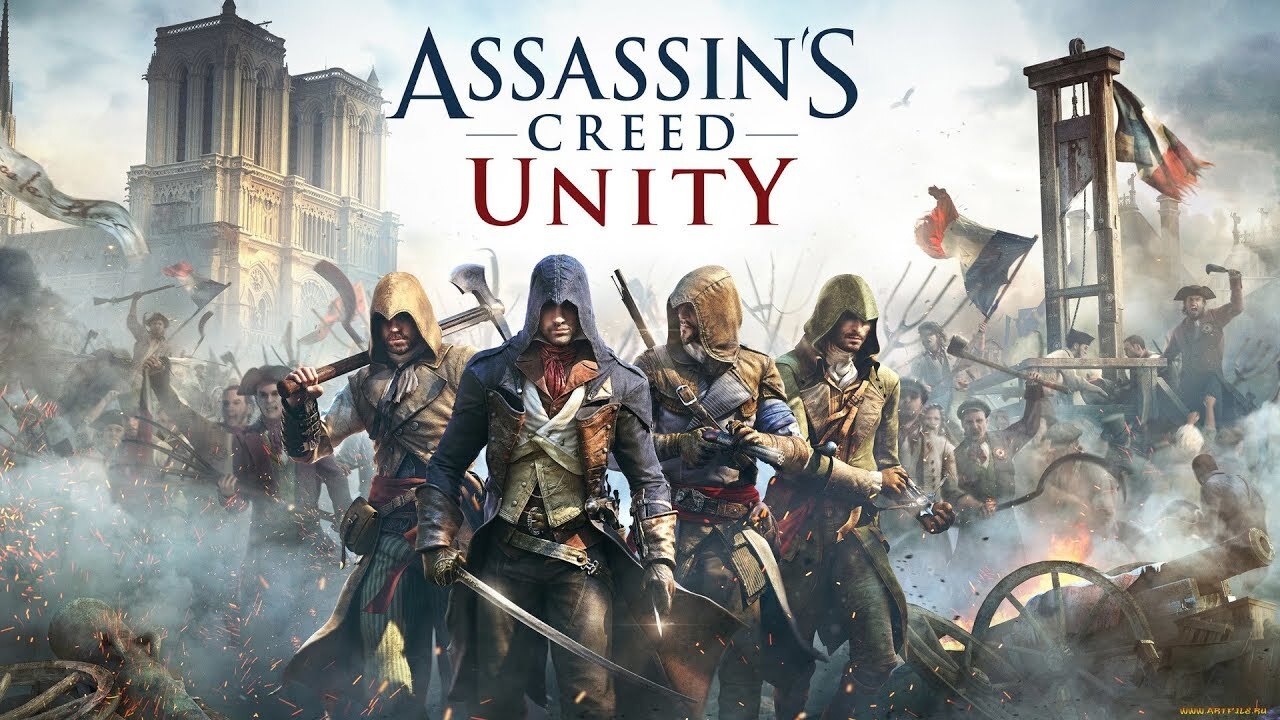 Paris, 1789 — The French Revolution turns a once-magnificent city into a place of terror and chaos. Its cobblestone streets run red with the blood of commoners who dared to rise up against the oppressive aristocracy.

As the nation tears itself apart a young man named Arno will embark on an extraordinary journey to expose the true powers behind the Revolution. His pursuit will throw him into the middle of a ruthless struggle for the fate of a nation and transform him into a true Master Assassin.

Introducing Assassin's Creed® Unity, the next-gen evolution of the blockbuster franchise powered by the enhanced Anvil engine. From the storming of the Bastille to the execution of King Louis XVI, experience the French Revolution as never before — and help the people of France carve an entirely new destiny.

Historical Tourism back to 1789 Paris

French Revolution happened during 1789-1799. After experiencing years of drought which destroy much of agricultural production, prices of staple good such as flour and bread went to a level that commoners could not afford. It was estimated that every worker spend 90% of their wage just to afford bread. With their livelihood at stake, the French could no longer tolerate the monarchy whereby the influential and nobles does not have to pay tax, while the poor have to pay heavy taxes on the failing economic system.

It was the first fight for democracy in the Continent with neighbouring countries controlled by monarchy system. French revolution are based on 3 ideas, liberty, equality and fragternity. Although the ideolegoies were good, the revolution took to a radical turn in 1792 when Maximillean Robosphere was in position leading the revolution. He convinced and won the vote of constitute by a narrow win to guillotined King Louis XVI and severed his head in the public. Historian agreed King Louis XVI is a good but weak king.

Thereafter Maxiimillean started the Reign of Terror when he used violence against violence with those suspected of against the revolution. More than 300,000 arrested, 17,000 guillotined on public executions (imagine daily public executions with people head severed) and 10,000 died in prison without trails. While democracy was in the wrong hand, ultimately the revolution failed as stability and order could not be restored. Napolean Bonarpte came about and consolidated the ideals of revolution under a military dictatorship restoring peace and order through the famous Napoleonic Code which form the basis of modern law.

Cinematics to Society of French Revolution

Landmarks and Buildings of City

Medieval temples, squares, gardens and churches sprawl across the city, broken with smoke rising and chunks of masonry littered across its surface. There are about 52 unique landmarks in the game and 40 of the landmarks are still around today which players can visit one day. Landmarks that are destroyed and long forgotten in the course of history have been recreated in this game to reflect a true 1790 Paris. E.g. Tuileries Palace (Burnt in 1881), Cour des Miracles (Huge Slums without laws), La Bastille (Castle made into prison), Districts around Bievre River. AC’s Unity capture the essence of city through huge amount of details such as ensuring buildings, windows, rooftops, roads and the atmosphere were historically accurate to the time. Player can expect a historical tourism back to a time that we could never have been.

Huge Masses gathering around the Guillotine Public Executions Area, Revolution Crowds are having riots and demonstrations throughout the city, Hundreds of people that are chanting, reading newspapers, burning effigies and occasionally fighting with the guards. Some people are throwing chairs while others drag bodies down alleyways. A revolutionary waves a flag, while limbless beggars to plead on the side. The city is alive with both dreams and fears.

Historical Characters intertwined with the story

Playing with Friends on team of 4

MSRP:
Now: S$25.90
Was:
ASSASSIN’S CREED® ORIGINS IS A NEW BEGINNING*The Discovery Tour by Assassin’s Creed®: Ancient Egypt is available now as a free update!*Ancient Egypt, a land of majesty and...

MSRP:
Now: S$25.90
Was:
Story 18th century, North America. Amidst the chaos and violence of the French and Indian War, Shay Patrick Cormac, a fearless young member of the Brotherhood of Assassin’s, undergoes a dark...

MSRP:
Now: S$25.90
Was:
Story 18th century, North America. Amidst the chaos and violence of the French and Indian War, Shay Patrick Cormac, a fearless young member of the Brotherhood of Assassin’s, undergoes a dark...

MSRP:
Now: S$20.90
Was:
Game Plot & Overview Agent Mayhem is a spinoff series and share same universe with Saints Rows and Red Faction. The game timeline is after Saint Rows IV expansion (Gat out of Hell). Though it...

MSRP:
Now: S$32.90
Was:
The game is considered a follow-up to the two Akiba's Trip games, but does not share any of its gameplay mechanics, instead focusing more on JRPG related features and structures. The...

MSRP:
Now: S$25.90
Was:
ASSASSIN’S CREED® ORIGINS IS A NEW BEGINNING*The Discovery Tour by Assassin’s Creed®: Ancient Egypt is available now as a free update!*Ancient Egypt, a land of majesty and...